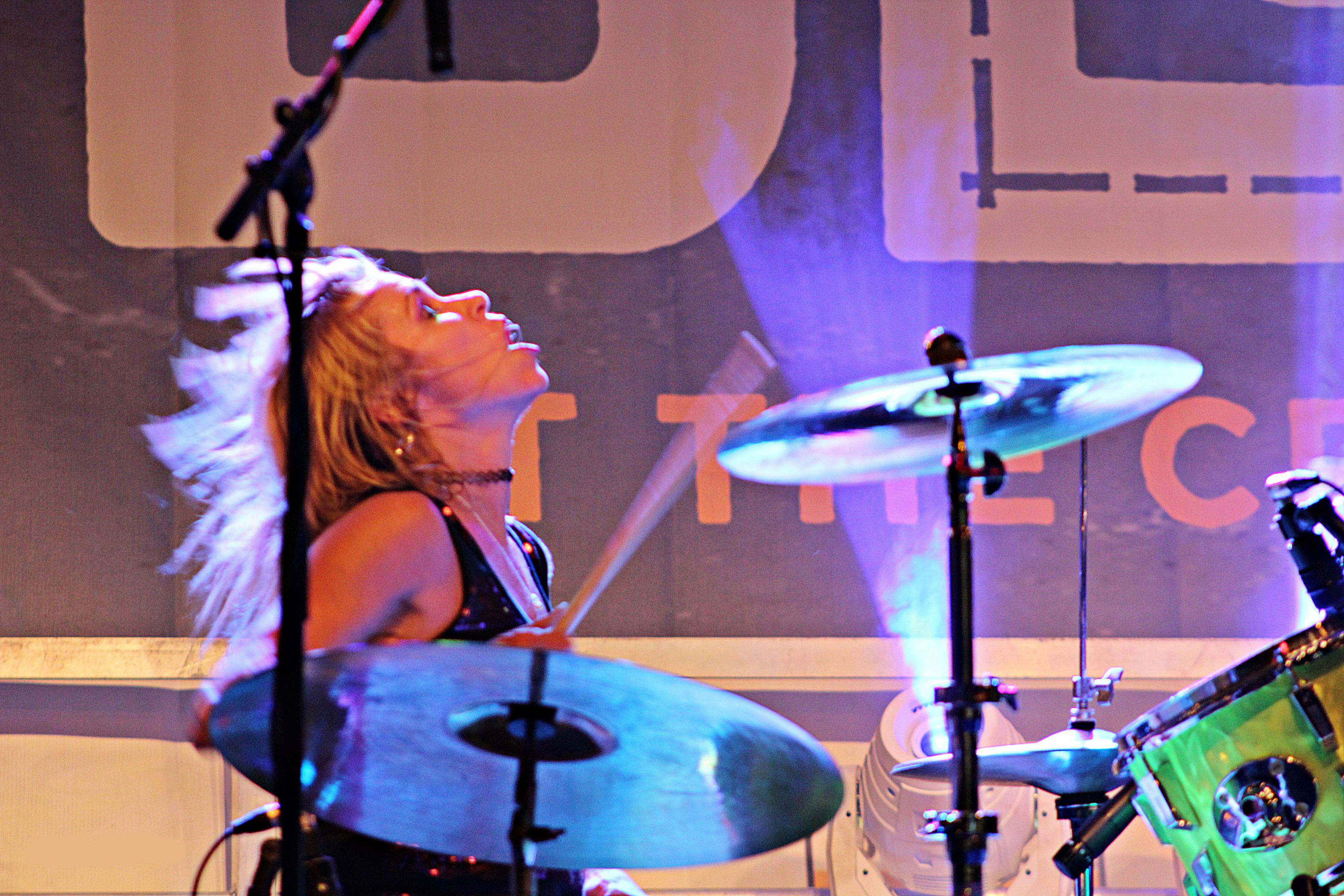 Sherri McGee knew she wanted to play drums since she was a toddler. Before getting a real drum kit, she played along to Tom Jones and Monkees records using two hairbrushes on a green Naugahyde recliner, and one of her earliest influences was watching Karen Carpenter on TV. Sherri has been called a cross between Patsy Cline and John Bonham.

Sherri started playing drums when she joined the 5th-grade school band in Glasgow, KY. By the time Sherri entered high school she was in marching band, concert band, stage band, and pep band as section leader and lead snare drummer. At age 15, she joined The Flying Scotsmen, a 17-piece swing/Big band of male adults. After high school, Sherri moved to Lexington, KY where she played top bass drum in the University of Kentucky marching band.

Sherri quickly became part of the Lexington local music scene in the Twinkettes, as one of three females fronting a Motown-type band, and Spree 33, a versatile new wave cover band. She was a founding member of Velvet Elvis, an original pop/rock band that released an EP and a full album before securing a record contract with Enigma Records. Velvet Elvis released a record produced by Mitch Easter and toured extensively; shot two videos for MTV, and were favorably reviewed in Musician Magazine and Rolling Stone, among many other industry publications. They opened for Let’s Active, Adrian Belew and the Bears, and UB40 to name a few.

In 1989 Sherri moved to Los Angeles where she played many styles of music with a variety of bands touring up and down the California Coast, and playing in and around Hollywood. She toured in Europe with Loaded. Later, Kathy Valentine of The GO GO’s asked Sherri to help found The Bluebonnets, an all-female blues band with Kathy V. on lead guitar. They toured parts of California and Texas.

Sherri has worked with Craig Ross (Lenny Kravitz), Denny Freeman (Bob Dylan), Jimmy Vaughn (Fabulous Thunderbirds), Clem Burke (Blondie), Ian Moore, James Infeld and Rosie Flores, among others. Sherri also played high-powered Bluegrass with the Cousin Lovers, honky-tonk with Miss Melba Toast, and once toured the US from the west coast to the east and back in 21 days with Neil Mooney.

In 2003 Sherri moved back to Lexington, KY, where she still resides. Today, Sherri is in high demand to play live shows, record, and tour, as befits her experience and knowledge in multiple diverse genres. Sherri is a dynamic, unique performer who never fails to bring her flamboyant personality to the stage. She is versatile and confident in any situation.

Sherri is the songwriter/drummer/manager for the Honky-Tonk harlot, Little Miss Tammy Smith. She is currently working on the development of “Lovin’ Drummin’,” a program for seniors and others that uses rhythm and percussion in a friendly “drum circle” atmosphere to promote health and wellness.

In September 2017, Sherri McGee and Kelly Richey were asked to play a well-received New Year’s Eve show with The Binders, an all-female band based in Lexington that featured hit songs by key women in rock. These two veteran female rockers, having only met a few times, never before had the opportunity to work together professionally. The chemistry between Richey and McGee was powerful. Kelly asked Sherri to join forces with her in a new all-original power duo, inspired by the White Stripes, The Kills, and the Black Keys. The new power duo is called The Spear Shakers—a force to be reckoned with.